Domestic violence has serious consequences both under criminal law and Family Law .  Under family law, the custody of the children and the amount of child and spousal support may be decided based upon domestic violence conduct.  If a person is a police officer or security guard, his weapon may have to be turned into the police department, and the person loses his/her job.  The violator may be forbidden from having visitations with the children without having a monitor present to make sure no one is harmed.  Spousal support may be eliminated to the perpetrator of domestic violence. 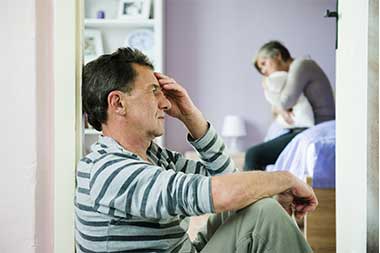 Domestic violence is a pattern of behavior that involves the physical or mental harm by one partner against another to gain control over the other person and can happen to anyone – male or female.  Even some of the richest and most famous in the world can experience domestic violence.  Tommy Lee hit Pamela Anderson  while she was nursing her baby and knocking the baby to the floor.  The news was filled with Rihanna  being beaten by Chris Brown  and the stories go on and on of domestic violence.  The Family Law courtrooms in Los Angeles are filled with domestic violence cases, and most of the courts have initiated pamphlets and procedures to simplify the process and handle the crowd.

Before the 1970s criminal arrests were very rare.  For instance, when a husband would beat a wife, the police departments and neighbors would turn the other cheek, and men believed that it was a matter of right as a husband to beat his wife.  Only in cases of extreme violence (i.e., the party was transported to the hospital) were any criminal or civil action taken by any court authority.  It was only in the 1990s that rigorous enforcement of laws against domestic violence became standard policy in the United States.  California’s Prevention of Domestic Violence Act was signed into law in 1993 and codified as Family Code § 6300, et seq. Yet, the procedures under the Family Law Domestic Violence Act are being continually revised by the courts and legislation.

Under the Family Law Code, judges can issue restraining orders in which the other party is restrained from being in close proximity to another party, their car, their work and so forth.  A recent issue is whether the other party should be notified before a hearing on whether a temporary restraining order should be issued and served upon them.  On January 16, 2014, the California Supreme Court provided guidance on Emergency Orders in Family Law cases for the judges .  The issue was notification of the other party before a restraining order hearing is held in which the judge may issue a temporary order.  Sometimes these orders involve child custody and support as well as stay-away or move-out orders and have serious consequences to both parties.

While the courts have instruction pamphlets and forms to be completed and many persons cannot afford attorneys, attorneys are most familiar with what evidence is required to show the mental and physical abuse and the California Rules of Evidence in presenting the evidence to the court.  If a permanent order is issued, the order will have to be appealed to the Court of Appeals to be overturned.  Thus the order may remain in effect for up to five years.  Accordingly, if not in the filing of the Request for a temporary restraining order, after a temporary order is issued, before a permanent order is issued, is the time to have an attorney represent you if there are serious consequences.

Law enforcement agencies suggest that if you or someone you know is in danger or has been assaulted, remove them from the situation and call 911 if they are unable to leave.