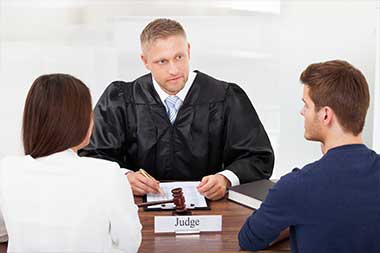 Should you engage a Legal Document Assistant to prepare your marriage dissolution papers?  Legal Document Assistants or paralegals are not permitted to practice law.  They can merely prepare the paperwork without giving legal advice.  Frazee Law Group has experienced some nightmare experiences for which the clients pay more to attain a marriage dissolution than if they had gone to an attorney in the first place.  For instance, one legal document assistant collected the spousal support but never gave the money to the other party who was suppose to receive the money and disappeared.  Another legal document assistant prepared the papers incorrectly with regard to child custody and support and the procedure had to be started all over.  Legal Document Assistants are not held to the high standard as an attorney.

Schedule a one-half hour FREE consultation for an analysis by an attorney.

Divorce is a court proceeding in which the couple separates due to the fault of one or both of the parties.  A party must prove “fault” in order to secure a final judgment or decree of divorce.  Not many states have fault divorces any longer.  New York was one of the last states to eliminate “fault.”  California is a “no fault” state and thus has “Marriage Dissolution” – not divorce.

When the parties agree as to all terms of the marriage dissolution, California has a somewhat simplified procedure if:

(1) The couple has only been married or in a domestic partnership for five years or less.

(2) Have no children together.

(3) Do not want spousal or partner support from each other.

(6) The total of the community property. obligations (other than motor vehicles) is $6,000 or less.

Not only is the paperwork simplified but also the court costs are reduced. In the regular marriage dissolution, the parties in a contested proceeding often must pay two court filing fees: one for the petitioner and another for the respondent in the total amount of $435 times two or $870. In the summary marriage dissolution only one court fee of $435 must be paid. In addition, if both parties (husband wife) come into Frazee Law Group with an appointment, RoseAnn Frazee can prepare the documents necessary for this process in an hour or less with a charge of $399 and be responsible for filing the documents with the court.  This service is available, along with all other services, in the evening or weekends.  Therefore, the cost for this marriage dissolution with Frazee Law Group is $834.

Such a Nullity may be valuable to someone who has money or property at stake because the parties are taken back to the situation before they were married.   The marriage would be declared null and void with no rights vested in either party based upon the marriage.  If there is no property to be distributed or in dispute, then the part(ies) may consider whether the extra expense and process are worth nullity judgment as opposed to a marriage dissolution judgment.

The party who desires the annulment must prove the elements of the basis for nullity.  This proof may be by live testimony or declaration depending on the judge or courtroom location. A marriage is NEVER legally valid when it is:

(1) Incestuous (the person who are married or in a registered domestic partnership) is close blood relatives.

Other marriage and domestic partnerships can be declared invalid because of:

(2) Unsound mind in that a party was unable to understand the nature of the marriage including obligations that come with it.

(3) Force in that a party consented to get married as a result of force.

(4) Physical incapacity in that one spouse was physically incapable of “consummating” the relationship.

(5) Fraud must have been committed by a party about something vital to the relationship that directly affected why the party who was deceived agreed to the marriage.  Some examples are marrying only to get a green card or hiding the inability to have children.

You may remember that Rene Zellweger  who had a four-month marriage to Kenny Chesney  received an annulled on the grounds of fraud. Britney Spears  secured an annulment after a drunken wedding in a Vegas chapel.

Some marriages are invalid from the beginning.  Mick Jagger  of the Rolling Stones tried to declare his marriage to Jerry Hall  was null and void by arguing that their Hindu wedding in Bali was invalid.  The parties settled with money and property going to Jerry Hall, and the marriage was probably never declared invalid.