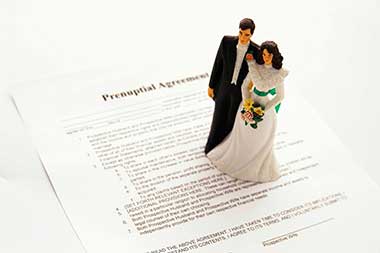 Each marriage is unique in and of itself.  For example, a couple could both move from their parent’s home into a marital home with no assets or debts of each party.  Basically, they planned to build their lives together.  Typically, divorce is not something to be considered at all.  A prenuptial agreement would not be necessary.

Nowadays, a lot of marriages occur later in life when assets have been accumulated and oftentimes second, third or fourth marriages with children involved which complicates the marriage contract.  In addition to assets, couples are bringing more liabilities, including credit card debt, student loans, and even mortgage debt into first and subsequent marriages.  In addition, because of the longer life span, we can expect to have more than one partner in our lifetime with assets accumulated in the working years.

Each marriage has a different story, different DNA so to speak, e.g., different religions, different cultures, different traditions, different ages, different places, etc., especially in Los Angeles County.  Accordingly, no simple one-size form fits all.  Sample California Prenuptial Agreement Forms on the internet are just that:  “Samples.”  The chance is slim that the agreement is valid.

Sometimes couples fall in love and get married before a prenuptial agreement can be prepared, e.g., “let’s just go to Vegas and get married” or circumstances arise in which the couple separate and then get back together or a cheating scandal arises or step-child intervene, etc.  Then a postnuptial agreement may be prepared.  Again, the provisions must be carefully drafted to be enforceable.  See the McCourt battle  

Should you hire an attorney to prepare the premarital agreement or postnuptial agreement?  Absolutely!!.  It’s a requirement:  unless a spouse is represented by an attorney, any provision in the agreement affecting rights to future spousal support (alimony) will not be enforceable.  When you hire an attorney, you are paying for that person’s expertise and advice more than just drafting an agreement.  When a party negotiates a prenuptial agreement, s/he must understand all the consequences of each individual clause and how they work together.  A man or woman cannot expect to understand all the provisions of a prenuptial agreement unless s/he is an expert.

Schedule a one-half hour FREE consultation for an analysis by an attorney.